I have been fortunate to participate in many wonderful nutrition conferences across the country in recent years, each of which has been meaningful and special in its own way, but Low Carb Indonesia—which took place last month in the bustling megalopolis of Jakarta—left me at a loss for words. Well, at least temporarily . . .

Now that I’ve recovered from my 30-hour odyssey to the opposite side of the planet, I feel compelled to share lots of words about the experience, although I’m not sure I will be able to do it justice.

This first-in-Asia low-carb science meeting was the brainchild of Mr. Tyo Prasetyo, a big-hearted and charismatic engineer/entrepreneur from Jakarta who launched a Facebook group dedicated to what he calls “Ketofastosis”—the practice of time-restricted, low-carbohydrate eating. He calls members of his group “keto warriors” because they are fighting against the pressure to eat carbohydrates.

“Mas Tyo” (“Brother Tyo”), as he is known by his nearly 350K followers, was called to this mission by his young son Alif, who was born with cerebral palsy and suffered from epilepsy as a baby. Mas Tyo was able to cure his son of seizures with a ketogenic diet, and transform his own health by losing weight and getting fit.

Ketofastosis has become a thriving, well-organized, grassroots revolution in Indonesia, dedicated to educating and supporting laypeople and clinicians alike all across the sprawling archipelago about the healing power of low-carbohydrate diets. Indeed several of the physicians I met at the conference first learned about ketogenic diets from Mas Tyo, and now not only follow this way of eating themselves, but also successfully prescribe it to their patients.

The Low Carb Indonesia meeting was a collaboration between Mas Tyo and LowCarbUSA founders Doug Reynolds and Pam Devine, who host low-carb conferences across the U.S. The two-day event provided a forum to make the case for low-carbohydrate diets as a safe, scientifically-sound, healing alternative to standard diets prescribed by many national guidelines. The conference was beautifully organized and ran like a well-oiled machine from start to finish, thanks to a top-notch group of dedicated volunteers.

The special nature of this event was evident as soon as we arrived in Jakarta. We were warmly welcomed by our gracious hosts, who presented each of the speakers with two gorgeous, custom-made batik shirts to be worn during the conference: brown-patterned tops for Saturday and multi-colored tops for Sunday, each pattern proudly representing a particular region of Indonesia.

Each speaker gave one presentation on Saturday and one on Sunday. It was wonderful to hear the physician speakers from Indonesia:

I enjoyed researching Indonesia-specific information about psychiatry, food, nutrition, and health to include in my presentations. I learned so much that was interesting, new and surprising to me.

For example, as a developing nation, Indonesia has made tremendous strides in improving the nutritional status of its people, as evidenced by significant reductions in child mortality and stunting. However, as the country has become more exposed to processed foods, a new nutritional problem is rearing its ugly head: childhood obesity. The coexistence of the seemingly opposite problems of undernutrition and overnutrition within the same population—and sometimes even within the same individual—is called “the double burden of malnutrition.”

As you can see in this chart, Indonesia already follows many of the recommendations included in most dietary guidelines around the world, basing their diet on grains and eating very little in the way of animal foods:

One of things I learned in preparing for my Sunday talk about mental health was that most people with mental illness in Indonesia do not have access to conventional care or psychiatric medications. Imagine if people were able to reduce their need for psychiatric care by improving the quality of their diet; this would potentially be more cost-effective than building specialty hospitals, training thousands of psychiatrists, and purchasing expensive medications for Indonesian citizens.

This conference was about so much more than the science of nutrition, though; it was about the people. Those of us from outside Indonesia were all deeply moved by the spirit of the people.

Every evening was set aside for special dinners where we could get to know the other speakers and spend time with the inspiring, hardworking staff who organized the conference. Without exception, everyone we met was warm, generous, and kind. Their passion for the cause was deep, genuine and palpable. There was an abundance of goodwill and so much laughter, playfulness and good humor—I don’t think I’ve ever smiled so much in my entire life.

At dinners and during conference breaks, people would gather for group photos, typically taken in sets of three: one formal shot, one shot with everyone giving the “K” sign (the hand symbol for “Ketofastosis”), and one “freestyle” shot where people had fun showing their personalities. The K sign—just one of Mas Tyo’s creative community-building strategies— was like a secret handshake, making people feel less like they were simply following a diet and more like they belonged to a special club.

The speakers and conference organizers: formal shot and freestyle!

When we asked Mas Tyo how he had amassed such a large membership so quickly, he said: “Indonesian people love to share.” We witnessed countless examples of the spirit of sharing—not only of material belongings, but of transformational experiences. Everyone we talked with had a joyful story to tell of how “ketofastosis” had improved their health. Many reported 50, 100, 150 or even 200-pound weight loss, proudly showing us their “before” photos on their phones. Men and women alike rattled off lists of prescription medications they are proud they no longer need to take. Another common theme was improved mental health-—resolution of anxiety, depression, or mental fog. Several people had completely reversed cancer diagnoses, while others beamed that they had been able to conceive a child for the first time after years of infertility. Mas Tyo refers to these miracle children as “keto babies.”

The time spent together during dinner each evening with fellow speakers, conference organizers and Ketofastosis members was not about hierarchy, influence, and access, but rather about celebrating a way of life that has empowered all of us to reclaim our health in a myriad of ways.

Mas Tyo was an incredibly generous host, treating all of the speakers and our partners (except for Dr. Asri, who unfortunately was unable to join us) to two nights in Bali together so that we could spend time networking after the whirlwind conference. Upon arriving at the Bali airport, we were greeted by a Bali-based group of Keto Warriors bearing homemade welcome signs, enormous smiles, and fresh flower leis! They whisked us away to our hotel and later picked us up and escorted us to an unassuming storefront in what looked like a strip mall. We entered and walked through the simple, empty establishment, wondering why nobody was eating there, only to exit out the back to find beautiful, long, candlelit tables on the beach covered with freshly-cooked seafood.

What a surprise to walk through the empty restaurant (above left) to discover this beautiful setting for dinner on the beach.

Courtesy of Dr. Kobal, we spent our second day together talking about our work and doing some sightseeing, then met up with the Keto Warriors for dinner our last evening on the island. The Bali keto warriors embody the magic of community support. As simple as a low-carbohydrate diet is, it can be difficult to maintain in a world full of tempting sweet and starchy foods. These women gather regularly for shared meals, coffee, outings, and chats and genuinely enjoy each other’s company. They know one another’s vulnerabilities, so they can help each other stay on track during times of stress. This network of people felt more like a family than a diet support group. 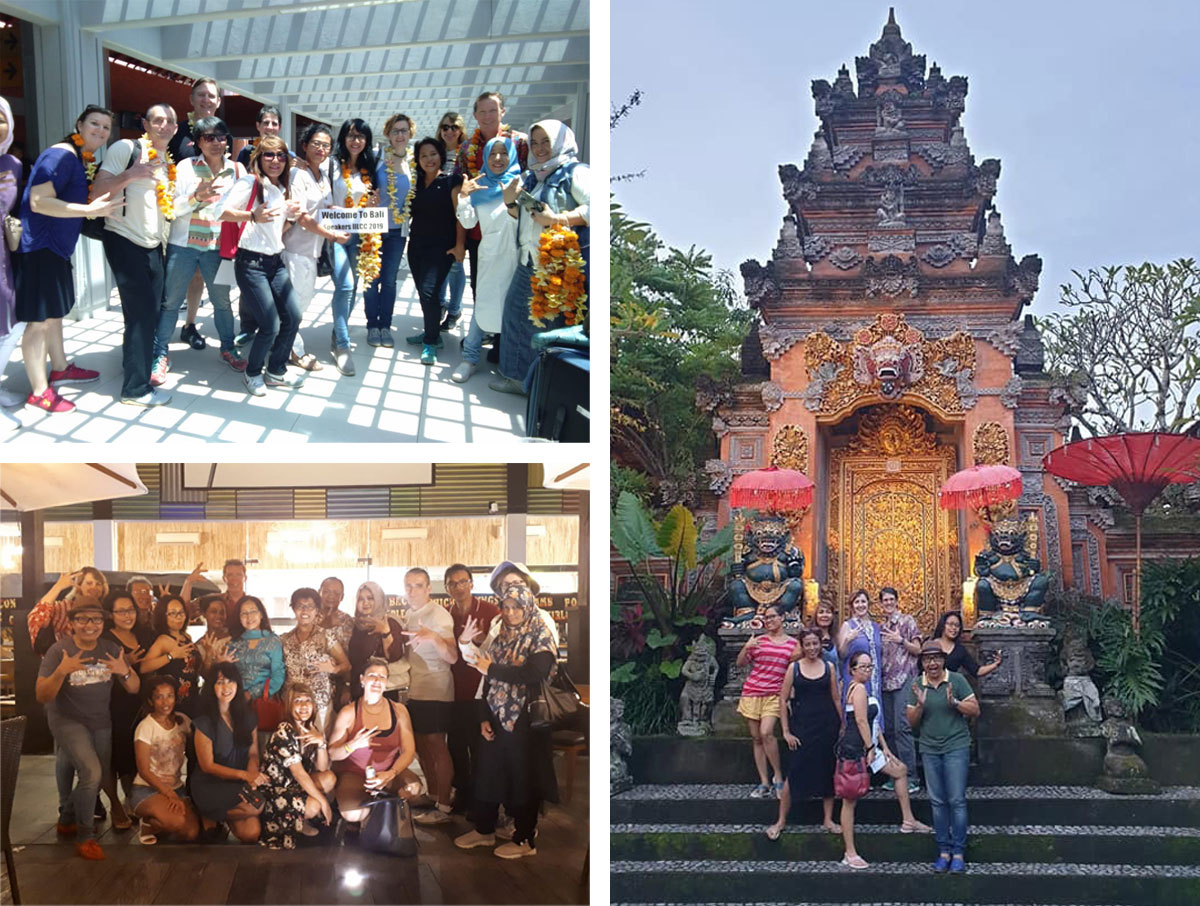 Those of us from outside Indonesia—all of us veterans of low-carb events—repeatedly remarked on how special this event was. When Mas Tyo asked us what made it different from other low-carb conferences, I couldn’t put my finger on it at first. Then, finally, on our last morning in Jakarta as we said goodbye to our hosts, I told Mas Tyo what I thought the secret ingredient was: “It’s the love.”

Thank you, Mas Tyo, fellow speakers, and all of the Keto Warriors for welcoming us into your world! It was an unforgettably inspiring experience that reinforced for me why it’s so important to continue spreading information about the power of low-carbohydrate nutrition. I’ve not yet attended a U.S. conference that included local policymakers or government health officials on the stage and in the audience, and that had such a robust media presence. Perhaps your landmark conference could serve as a model for us here in the U.S. (and in other countries) about how to create real, lasting political change in the service of public health . . . and happiness.