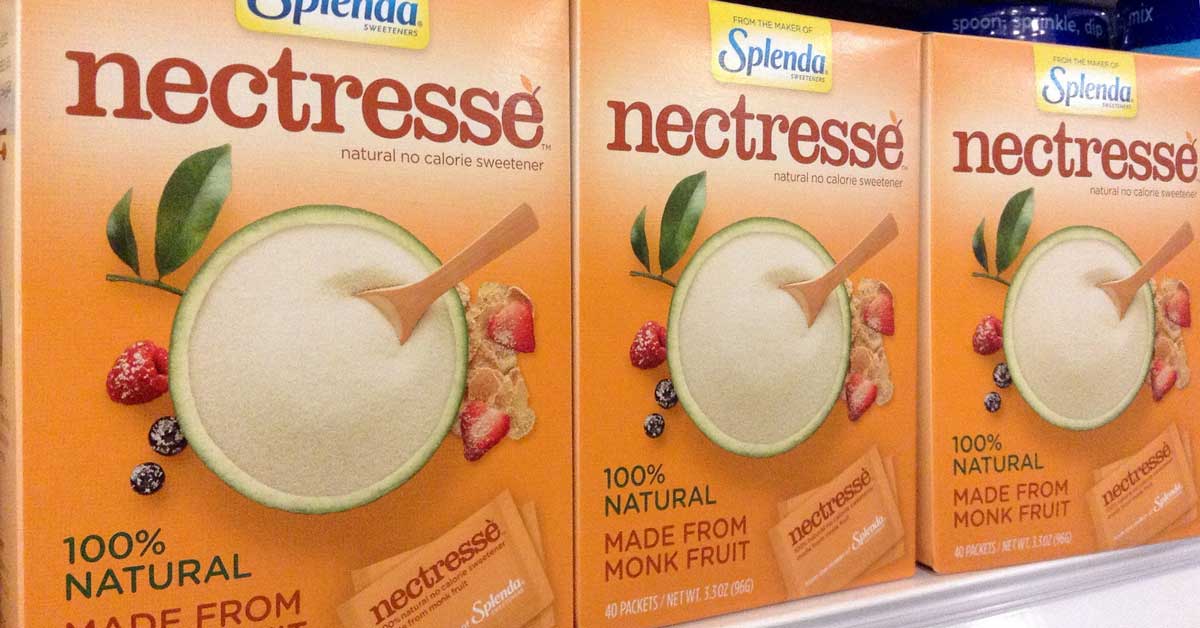 Nectresse is a new sweetener marketed by McNeil Nutritionals, the manufacturers of Splenda. Unlike Splenda, Nectresse is made from all-natural ingredients and therefore may appeal to those who wish to cut calories and exposure to the damaging effects of sugar without having to resort to artificial sweeteners.

As you can see, the vast majority of Nectresse (2 grams or 83%) is actually erythritol, not Mogroside V. The erythritol, sugar, and molasses act as sweet fillers. Mogroside V is so intensely sweet you wouldn’t want a whole packet of it. [It is for this same reason that the main ingredient in Splenda is not super-sweet sucralose, but dextrose, which is added as a bulking agent.] In the U.S., foods can be labeled as zero-calorie if they contain fewer than 5 calories per serving, so we don’t know exactly how many calories are in a 2.4 gram packet of Nectresse, only that it has fewer than 5 calories. Below is a quote taken directly from the manufacturer’s website:

“Like other no-calorie sweeteners, NECTRESSE Sweetener contains a small amount of carbohydrate (1-2 grams per serving) from other food ingredients to provide needed volume and texture. These food ingredients, which include small amounts of erythritol, sugar, and molasses, contribute so few calories per serving that NECTRESSE Natural No Calorie Sweetener Products meet the FDA’s criteria for no-calorie foods (<5 calories/serving).”

Erythritol is produced by adding yeast to glucose (a simple sugar) and letting it ferment. [Erythritol does exist in small amounts in nature, as well; however it would be expensive and impractical to collect it in large quantities for mass consumption.] Compared to sugar, sugar alcohols are poorly absorbed into our bloodstream, which is why they tend to be lower in calories. Most sugar alcohols make it all the way to the large intestine, where they may be fermented by bacteria, which can cause gases, bloating, and diarrhea. Sugar alcohols are notorious for causing embarrassing gastrointestinal side effects, especially if eaten in large quantities; however erythritol is the sugar alcohol least likely to cause these problems.

What is Mogroside V?

While it sounds like a great name for, say, a big ugly orc, Mogroside V is an intensely sweet compound, 300 to 400 times sweeter than sugar. It is isolated from the monkfruit, a round, green fruit which grows in southwestern China—it is called monkfruit because it was eaten by Chinese monks as early as the 13th century. It also goes by many other names, such as luo han guo (aka “lo han”), rakanka, and Siraitia Grosvenori Swingle. The monkfruit belongs to the Cucurbita family of fruits, which includes cucumbers, melons, pumpkins, squashes, and gourds.

Monkfruit itself is described as having an unpleasant, cloying flavor, inspiring mouth-watering adjectives such as “licorice-like” and “vegetable-like.” Fresh monkfruit goes bad very quickly, so it is typically sold dried. In Asia, monkfruit has long been thought of as a medicinal fruit, being used to treat common symptoms such as coughs, sore throats, and constipation. Mogroside V makes up 1% of the weight of a dried monkfruit. Mogroside V dissolves easily in water, is heat-stable (so it can be used for cooking), and has a shelf life of approximately three years at room temperature.

I personally do not like the taste of Nectresse—I find it intolerably bitter, just as I do Stevia extract. However, everyone’s taste buds are different, and I understand that many people like it.

How does the human body handle Mogroside V?

Your guess is as good as mine.

To my surprise, I was unable to locate a single scientific study of Mogroside V metabolism in humans. There are just a handful of studies of this compound, some of which are published only in Chinese. All studies available were either conducted in laboratory animals or under test tube conditions (in vitro) using isolated cells. Nevertheless, in July 2009, the FDA declared Mogroside V “GRAS” (generally recognized as safe) in response to an application by the New Zealand company BioVittoria [BioVittoria supplies the monkfruit extract used in Nectresse]. So, I wrote to the BioVittoria company requesting scientific information, and was delighted to receive very helpful information from a kind representative, including a detailed research report, complete with dozens of references.

Poor rats. I doubt you could design a menu that is farther from the natural diet of a rat if your life depended on it. Changing anything about this diet was bound to be an improvement. These animals did not gain weight or eat more food on the Mogroside diet compared to the regular diet. However, given their atrocious diet, I’m not sure it would have been possible for them to experience more weight gain or higher appetites than they must have been experiencing already.

In short, these studies tell us nothing about the effects of typical doses of Mogroside V on the blood sugar and insulin levels of human beings.

Why even bother to question the safety of a natural fruit extract? Because there can be important differences in health effects between eating a whole food in its natural state and consuming unnaturally concentrated extracts from that same food. Fruit extracts are, by and large, far less likely to be harmful to humans than vegetable extracts, so that is reassuring. (For more information about fruits vs. vegetables, see my pages about fruits and/or vegetables.)

What about you? Have you tried Nectresse? Do you like it? Do you respond well to it? I'd love to read about your experience in the comments below.

If you are interested in reducing the sugar in your diet, you may also want to check out my insulin resistance post that includes an infographic about how to identify hidden sugars in your diet as well as my refined carbohydrates list.

I am very grateful to Mr. Paul Paslaski of BioVittoria for providing such helpful scientific information regarding Mogroside V.